After last weekend’s effort I was on 985 Summits on the Air activation points. 1000 points is the level of the pinnacle activator’s “Mountain Goat” award. I had been quite busy recently, but I was keen to finally get enough points to become eligible for this award.

Some time ago, I had identified three summits, including Mt Duffy, as suitable for an activation, but due to fire burning, there was no available access method. Now, the 18 points they offered would be enough to get Mountain Goat.

First up was the northernmost summit. I headed up the previous evening and the plan was to sleep in the car. I would access via Gum Top Rd which passes over Mt Duffy. Gum Top Rd branches off Eildon-Warburton Rd at 093102. It is quite passable in a 2wd. The road generally follows the alignment as shown in Forest Explorer, except that the road does link up through to Mt Duffy at the Harry’s Track junction. OziExplorer maps show the link. I was able to get the Prius through quite easily in after dark driving. I continued onto Dray Track. Again, this section is passable with care in a 2wd. There is one steep descent (ascent coming the other way). It did not look too steep going down, but we would be finding out coming the other way later!

I proceeded to point 163558, where a 4wd track comes down from VK3/VN-008, and setup the mattress and sleeping bag in the back of the car. The 2004 model Prius has just enough room back there with the back seats down to fully stretch out.

Next morning, out with the pack and up to VK3/VN-008. There is no track marked on Forest Explorer, but OziExplorer shows the alignment. There is a rougher track heading down the north east side of that summit, and then it climbs up the VK3/VN-010 hill to point 182568. From here, head along the ridge. There is a very old overgrown track here. Keep to the centre of the spur, and it will be picked up fairly soon. This old track makes for easier access for the last 500m to the summit.

I arrived and started activating at around 8am. People are still getting up that time of morning so there was no big pile up. It was still a comfortable activation. These days with an efficient setup, there is no endless calling on 40m and not getting anything, if the band is at all open.

Access to this summit was simply retracing my steps back from VK3/VN-010. Back to the track at point 182568. Oziexplorer shows this track continuing down the hill to the nor-northeast but it looks very overgrown. I headed back down the steep hill and climbed up to VK3/VN-008. I operated from the track, mounting the squid pole against some saplings from the 2009 fire.

Signals here were up on VK3/VN-010, but it happens as band conditions change. With a good cloud warming end fed on 40m on a 7m squid pole, conditions have to be pretty terrible on 40 for there not to be any action.

There was also a moderate pileup. SOTA activations during the week still have plenty of chasers.

There were good views of Mt Torbreck VK3/VN-001: 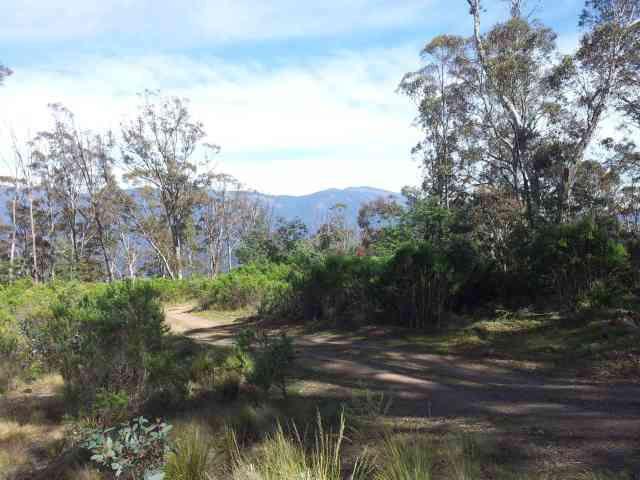 I also could look over at Mt Duffy, the site of the third activation. Mountain Goat status awaits!

The final activation was at Mt Duffy. I got back in the car and headed generally southwards towards Mt Duffy on the Dray track. It was good going in the Prius, but the steep section awaited. I anticipated I would need a good runup. The Prius generates a lot of torque at low speeds with the electric motor, but this is not always a good thing as it causes the tires to spin, then the anti-skid control cuts the power. Makes getting up hills challenging. I needed to get the car up this hill, considering I came down it the previous evening. I was able to get up without too much trouble on the first attempt. After that, easy going to Mt Duffy. I parked the car in the activation zone about 200m from the trig point. I then headed down another road and came up an old fire break to the trig point. There is a little bit of controversy about “final access to the summit” being non-motorised, and what does this mean, but I like to leave the activation zone and re-enter it with all my gear non-motorised. Of course I note the SOTA MT’s concession to people with mobility disability not needing to do that, and I’m ok with that.

Anyway, I setup at the trig point. Before starting the activation, I took a video:

With the activation done, it was back to the car and out on Gum Top Rd. It is easier going back to Melbourne via Marysville rather than by Warburton.

The SOTA 1,000 points does take a lot of effort in VK3. Many summits I’ve activated have been in the wilderness. While this means they might take a lot of effort, it only magnifies the fun. SOTA might seem an odd activity to some, but the comradely with other activators and SOTA chasers has been great. I look forward to many more SOTA activations in the future.

In recent months, I have been too busy to be able to do the multi-day pack-carry SOTA adventures that I have done in the past, but I look forward to sneeking in a few of these over the summer months.

I think with the Mountain Goat achieved, it might be time to shift gears a little and perhaps go back to a bit of 2m colinear usage, or perhaps brave taking out the Elecraft KX1 for CW only activations!?

3 comments on “3 summits and Mountain Goat”