Rik Head VK3EQ mentioned that he would attempt to activate Mt Eaglehawk before the summit is no longer valid for SOTA activations. I was also keen for the same, so Rik kindly gave me a heads up when he was heading up.

Rik was heading up with a friend, Russ, up to Bogong and Mt Eaglehawk was an on the way stop. I headed up myself to join them, and then planned other activations afterwards.

Mt Eaglehawk is on private land, so if anyone else plans an activation, they would need to get information from Rik first. It turns out that Rik grew up in the area and therefore knows a lot of people.

We were able to get up the whole way to the summit in Rik’s Subaru. We needed to pile out of the car for one steep bit, where the wheels were slipping on the loose gravel, otherwise it was armchair ride. Both Rik and I don’t care for easy summit access interpretations for able bodied people, so we duly headed down 30 vertical metres with all our gear and headed back up and operated away from the car.

Rik quickly got his contacts, while I operated the FT-817 on CW. It’s interesting using the touch keyer again after using the KX1 key over the last month. The touch keyer just needs to be touched – so to speak, so it is ultra responsive. I’m not sure how it would go if trying to key CW with gloves on, but I know the KX1 keyer can do that.

For people unfamiliar with CW and what I’m talking about, these keyers are used with an electronic keyer to generate the dits and dahs of morse code. By touching one paddle of the keyer, dits are generated, the other generates dahs. Touching nothing generates nothing. As most morse characters have various combinations of dits and dahs, the two paddles are touched as required. The touch keyer needs only to have touch by a finger. No force is necessary. The KX1 keyer needs only light force.

These paddles allow for morse to be generated much more cleanly than a “straight keyer”, which is the old style morse keys from the first half of the 20th century. Some feel, that true CW is only on a straight key, but I do beg to differ.

As I had a FT-817, I also brought a microphone, and operated voice so a number of people absent from the log over the last month with me using the KX1 found their way in this time.

I feel that the KX1 receiver is significantly better than the FT-817, and for operating CW, it is a much better radio. I do have a narrow filter in the FT-817 for morse, but the variable filter of the KX1 is a nice feature. The KX1 could resolve signals that the FT-817 could not. Of course my own signal is up using the 817, as I can send a full 5 watts, rather than the variable 1 to 3 or so watts on the KX1 based on input voltage, band and antenna.

There are some nice views on the approach to the summit:

Looking towards Mt Hickey from near Mt Eaglehawk 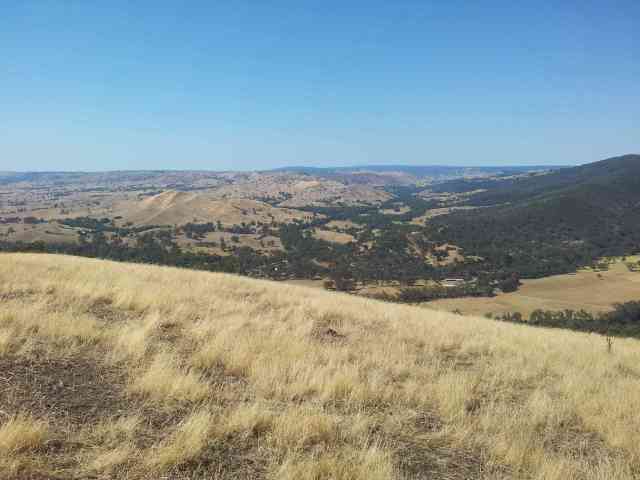 With Eaglehawk done, I said farewell to Rik and Russ, and headed towards Barranhet. Peter VK3PF had activated this summit, so I intended to follow what he had done. I used Bonnie Doon Rd and Mt Piper Track to get within about 1.5km of the summit. The road enterers a pine plantation and there is a no entry sign at 972212. The edge of the plantation is on the edge of state forest, however and state forest is fair game. I don’t think it would be right to use the parameter road as this tends to go onto pine plantation land, but using the edge of the road clearing seemed ok to me. On the way up, I proceed to point 971215 and then bushbashed up the side of the mountain, drifting a little to the north and came to the summit from there. On the way back, I used a road cut into the mountain, which skirts the summit to the north. It heads southwards to the plantation at point 962211. This would be the easiest way to access the summit, to proceed on the parameter of the plantation from 971215 to 962211 and then use this road northwards in the state forest up to close to the summit.

I used the KX1 on CW 20/30/40, while the FT-817 on SSB. There is a growing audience of CW chasers (although nearly all of them also will chase on SSB, given no CW). A few are willing to chase CW even though they knew for this activation they would likely pick it up a little later on SSB. That was pleasing.

One decision I have made is that I will adjust the “random wire” with a proper 1/4 wave counterpoise on 40m. I already have one for 20/30 and the KX1 can tune the wire no problems on those bands, but 40 is always a bit of a problem. SWR tends to be 1.7+, but often low 2s, even high 2s. Not really good enough. On the other bands, it generates higher power and SWR is generally below 1.5. It is time to get similar performance on 40, and also be able to use 7.027 and 7.032 as I wish, rather than having to retreat up to 7.287 sometimes.

Got a shot towards my net destination from point 962211: 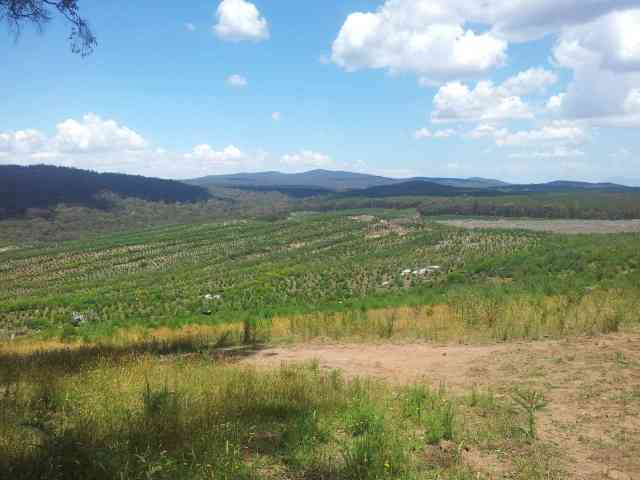 Mt Strathbogie from near Mt Barranhet

This summit can be accessed from Ferraris Rd, which passes about 500m to the west of the summit. A 4wd track heads up from there, with a branch going to the summit itself.

I operated here using the KX1 on CW and the FT-817 on SSB. I used only the endfed from this summit on 20 and 40 only. VK6NU was trying to get me, and we heard each other, but not enough to get the contact.

The summit has some large rocks but it is still all under tree cover. There is an installation on the summit, with a CCD camera for those who want to get up to trouble.

My final summit of the day was just down from Mt Strathbogie. I accessed it using Ferraris Rd down to Glen Creek Rd. Good going in a 2wd. Older maps show a track going to the summit from the saddle, and this road exists, although is gated. It’s steep in places but not too hard going up to the summit. I finished the day operating only on the FT-817, for both CW and SSB. VK6NU appreciated the higher power, and we completed the contact here on 20m.

A nice day out for some SOTA, but now it’s back to work!