Day 4 of my 2013/14 New Years trip continues on from the 4 summits done yesterday. Today sees me take on a more significant challenge, Mt Darling Range.

This summit is in a wilderness area and is now quite remote from any motorised access. The closest point of easy access is Dimmick Lookout at 809716, which is where I overnighted before attempting this summit. Before heading off, I had a look at the early morning view:

This summit is hard. Allow a full day to get in and out and this assumes that you have a good level of fitness. If you don’t possess this, I suggest you select a different summit to activate.

The fiesty maps that I had loaded into Androzic suggested that Carey Road leaves from Dimmick Lookout. It does not. It starts about 150m back along the track and has an alignment that zigzags on the southern side of the spur. I headed off going down the spur to the south east of the lookout. There are some gaps in the tracklog, but the idea can be made out. Here’s the tracklog:

Tracklog of activation of VK3/VT-009

The tracklog shows the path of Carey Road with its zigzags. I actually didn’t know it, but I would have gone on it briefly on way down on the initial descent to Mt Darling Saddle. I picked up the track at point 825711 and decided to use it to climb the eastern side, even though it heads south-south-east. What got me was that the track turns, but not as shown on the old forest explorer maps (does not show there now) or on the fiesty maps. It turns a little sooner and stays further west of Mount Creek for longer. There is another track continuing on the south-south-east alignment, and this is quite tricky to avoid on the way out to the summit. The turning point is a 90 degree turn – its hard to see as the track is quite overgrown, but look for the 1/2m cutting for the side of the track into the hill. It should remain on your left as you “go round the bend”. If it goes onto the right hand side, you’ve gone too far.

Anyway, I lost the track and proceeded across the Mount Creek. I found a hunters hut hidden away at around 832705. There was no one around. I then decided to head up the hill. This route is not shown on the tracklog as I had lost GPS fix for awhile. The log shows the upper point of the climb, and my decision to head towards the junction of Carey Road and the track heading up to the summit itself.

I did not find this track on the way up. I just made my way along the ridge. After a further kilometre, I ended up picking up the old walking track and used it for the remainder of the trip to the summit. It makes it easier – even though the track is quite indistinct, it’s still 50% faster than going off track.

I activated within 150m horizontal of the summit location. It would have been within 10 vertical metres of the summit. Good enough. The activation was on the KX1 with the 4.7m lightweight pole. It was nice not having to bring the big pole on the scrub bash, this little pole is enough to do the job.

On the way back, I decided to stay on the walking/old 4wd track as long as I could. I headed back and was basically able to stay on the track the whole way all the way back to the car. It does take some concentration, because parts are overgrown. There are bits easier higher up: 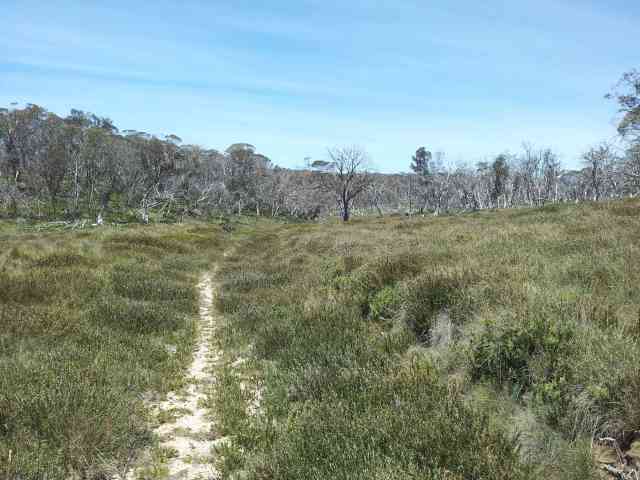 I certainly noticed that the old road alignment crossed Mount Creek about 500m upstream from where marked on the map. The track here is quite overgrown. The last 500m before the turn on the the track going north-north-west down to the saddle is quite indistinct, but still can be followed. It is not hard to follow the track from the turn, all the way back down to the saddle and then up to the lookout. It is easier, and although it is longer than going off track straight up the spur back to the lookout, it is faster.

It was a solid 5 hours of walking out, and a solid 4 hours back – without breaks. If you are not as fit as me, it is likely to take you longer.

All in all, it was a good day to get out there and tackle this summit. For those wanting to have a go, hopefully these notes are of assistance.